Tips On How To Use Earth Chakras As Powerful Vortexes

Just as humans have chakras our planet Earth also has chakras or swirling vortexes of energy. They help the planet maintain balance and stability,  health and well being and assist humanity and all that roams and grows upon it to prosper.
What is a Chakra?
Chakra is a Sanskrit word meaning wheel or vortex. A Chakra is a non-physical energy center located in and around the body that acts as a conduit or connector between you and Source Energy. It is a part of our consciousness and energy body as is our aura and energy bands. Chakras are associated with parts of the body, mental, emotional and spiritual Self.
The human body has hundreds of chakras but for the most part we tend to focus on 12. The seven chakras of the body held in our chakric column and chakras eight through 12 the spiritual chakras above the head connecting you to the Quantum Field. Our Planet Earth also has hundreds of Vortex points across the globe and seven major chakras.
Why Are Chakra’s Important?

Because chakras are a conduit for Source Energy to flow through us and around us, when they are blocked, closed, malfunctioning or lack luster  often mental, emotional, physical and spiritual well being is limited. Illness and disease present. We function out of harmony and balance.
What Are The Earth’s Chakra’s?  The Earth’s chakras help to create the health and balance of the planet and are power points of energy that influence us and all that lives in our world. 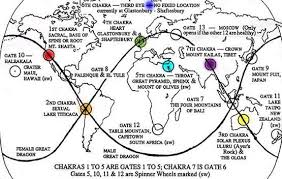 Chakra One: Mt Shasta, California USA Earth’s base chakra.  A base or foundation of the world’s life. Where universal life force gathers to burst forth onto the Earth plain. Home of St. Germain. High UFO Activity.

Chakra Two: Lake Titicaca, Peru/Bolivia Border, sacral chakra  is the center of creation of new species.  The sexual chakra of the planet and connected with Manchu Picchu.  Also a presence of high UFO activity.
Chakra Three: Uluru and Kata Tjuta Australia form the solar plexus chakra of the Earth. They are also known as Ayers Rocks and The Olgas respectively and are associated with the vitality of the planet, where emotion is processed. Australian Aborigines refer to this area as the umbilical chord of the planet.

Chakra Four: Glastonbury, Somerset and Shaftesbury, Dorset UK is the world’s heart chakra. It is also thought to be the home of the Holy Grail considered by many to be the cup that Jesus drank from at the Last Supper and that Joseph of Armathea use to collect Jesus’s blood at his crucification. The Holy Grail is much sought after and is referenced often in writings about King Arthur. High levels of crop-circle sightings and activity in this area.
Chakra Five: Great Pyramid, Mt. Sinai and Mt. of Olives in the Middle East comprise the Earth’s Throat Chakra. The voice of the Earth Spirit where the people and life cry out for assistance. This area is at the center of our modern day earth’s land mass.

Chakra Six: The Aeon Activation Centre is the Third Eye and it moves. Currently thought to be in Western Europe. Aeon (eon) is a very long or indefinite period of time. This chakra opens portal and gateways to other dimensions similar to the function of our human pineal gland.

Chakra Seven: Mt. Kailas in the Himalayas, Tibet is the the world’s Crown Chakra.  Kailas is considered to be the Roof of the World  broadcasting the Earth’s will and purpose. This chakra connects us to Source, God’s Will and all of the Spirit Realm.

Tips On How To Use Earth Chakras For Your Highest And Best Good.

I have found personally and with my clients that one of the most powerful ways to use the Earth Chakras is during meditation and personal inner growth work.
Syncing up via visualization, intention or command with the energy of one of the Earth’s Chakras adds power and might to your inner work practice.
Select an Earth Chakra that you feel drawn to in the moment and harness the energy of that spot to enhance your shift and change.
Or perhaps you are working on an issue within your body IE stomach pain, connect up with the Australian Chakra associated with the solar plexus for added benefit of release.
Maybe you want to open up your intuition and inner knowing, connect with Mt. Kailas energy, the third eye chakra of the world to boost your opening.
Visiting these locations in person will place you in their energy field for deep connectivity and personal enhancement, but know that simply by intention or imagination you are there in that place, connected with the energy, to use for your and the planet’s highest and best good.
~Love, Esther

Are you ready to work on your personal chakras free them of limiting beliefs, decisions, conclusions, behaviors, energies, other people’s influence? Get you chakra shining brightly, spinning full force and activated fully? Consider doing some chakra work with me during a one on one private session and open yourself up to greater possibilities Click here to open the door.