December 21st, 2012 is the final day of the Mayan Calendar. No doomsday talk here only excitement about ascension, a cycle complete, moving into higher frequencies,  grounding into new earth energies, hope, joy, love and peace.

We are experiencing an acceleration of consciousness like never before. While this push started many years  even decades ago, 2012 has been a year of fast moving change, transformation and renewal. Reflect upon the last few months. You have gone through many experiences and have released density. Do you even recognize the person you are today compared to January First?

While much is still the same as our reality plays catch up, our inner Self has been dramatically altered. Limitations have been released, negative beliefs let go, our vibration is higher. Even those who are yet unaware of the significance of this  time in world history are being affected. Everyone is moving at their own pace and willingness.

On December 12th the 144 crystalline grid came together around the globe thus establishing all 12 dimensions on planet Earth. We are rapidly moving from the 3rd to the 5th dimension. The 3rd dimension will not disappear yet and people will continue to function in its density, but for those who are consciously moving forward and higher, the energy of a 5D world is emerging. Polarities and dualities are collapsing, limitation is falling away, the Divine Feminine and Masculine are blending in harmony and manifestation is quickening. All of this won’t happen overnight but many of you are already noticing the Shift in yourself and the reality around you.

12-12-12 a gateway opened for all of Earth and humanity to take a quantum leap forward. During the period of December 12-21 we are being flooded with Divine Light and Universal coding to assist us in our ascension to higher consciousness and 5D new earth energy. On the 21st the gateway closes. Yes people will still ascend and change in years to come. Consider this to be a big push forward or the wind at our backs lovingly nudging us along. 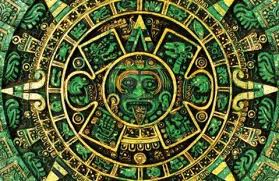 According to John Major Jenkins an independent researcher who has devoted himself to reconstructing ancient Mayan cosmology and philosophy, on December 21st as the Mayan Calendar ends there will occur a rare alignment as our planet passes through and aligns with the galactic core of the Milky Way. This alignment of Earth, Sun and the Galactic Centre of the Milky Way happens once every 26,000 years. The last similar alignment was when the last ice age began.  Jenkins says this is real astronomy and not just spiritual interpretation. 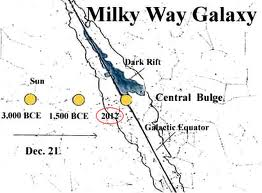 The yellow circle is Earth and how it will be passing through the center of the Milky Way.

We are living at the beginning of a new epoch, the dawn of a new consciousness: human, planetary, universal, multi-verse and galactic. As we move into new earth energy of Divine Love, order, harmony and balance there is a new beginning.

It is all over December 22nd? No sweet being. In fact the energies will be high right until the end of the year and then we step into a whole new cycle.  Humanity is in a process of change and this year was a giant leap forward. Each of us stood in line waiting for a human body to incarnate in so that we could be here and have this rare and unique experience.

If that isn’t enough cosmic influence, December 21st is also Winter Solstice. It is an important day for our planet and its relationship with the sun. December 21 is one of two solstices, days when the rays of the sun directly strike one of the two tropical latitude lines. At precisely 7:11 a.m. EST on December 21, 2012 winter begins in the Northern Hemisphere and summer begins in the Southern Hemisphere.

And wait there is more… on the 21st  planets form a “Yod” which is also called “the finger of god” among astrologers. Pluto and Saturn,  point right at Jupiter. Whew the intensity!

Your role in this ascension is to add light to the world. All of you who keep asking, “What is my purpose?”  your purpose is to grow, learn, experience, release limitation, move into higher consciousness and add your light to the world. Ask Universe for guidance as to what that means for you specifically and heed the call. We the people and the Earth need you.

To help yourself make the most of this energy and reboot your body, disentangle yourself from 3D energy. Keep releasing limitations, negative beliefs, thoughts, perspectives, patterns, judgments and behaviors which no longer serve you. Do your inner work.

I have been asking Universe everyday during this time of the open gateway to flood me with as much Divine Light and coding I can handle and then stretch me so I can hold more. There have been times of discomfort as a result  but I know it will be well worth it in the end.

To support all of us during this very special time on our planet on December 21st from 12 noon to 1 pm EST I am hosting a Global Meditation and Energy Event. One hour of pure energy work to help you to continue to release limitation, adjust your body to the new vibrations and ground into new earth energies. Cost has been kept to a minimum so all can participate. To learn more and sign up click here.