One of the most frequently asked questions I field is: What exactly are the 3rd, 4th and 5th dimensions?

It is an excellent question as the terms are often tossed out during this time of accelerated change, many opinions abound and some people have no point of reference.

I thought I would write a post expressing my point of view and perception of what the dimensions are and suggest after reading it that you ask inside of yourself what feels right and true for you.

3rd Dimension: It is the world that we grew up in and is currently collapsing. A space and energy which is rigid, characterized by polarity (good/bad, rich/poor, black/white), conditions (if I do this you must do that), judgement and a time measurement of past, present and future. The energy is heavy and dense.

4th Dimension: In this dimension people are starting to wake up and become more aware and conscious. There is an understanding that you are the creator of your reality, thoughts become things, that energy, frequency and vibration matter.

Your past begins to become your history; simply information rather then something you are chained to and carry with you everyday, recreating. The future is viewed as something you choose with your beliefs, thoughts, actions, vibrational frequency. You begin to be more present, in the now and create from that perspective rather then create from what happened to you in the past. The energy is lighter and less dense.

My belief and understanding is that there are many rungs to the 4th Dimension and humanity is climbing up these rungs during this time of accelerated change –and yes we still slip into 3D energy from time to time but it is happening less frequently.

Truth there are many times I feel that I and the people around me are zipping up and down the dimensional ladder all day long while we ground and stablize ourselves into a 5 D world.  At the same time there are still many people stuck in a 3D world holding onto to their limitations and ignoring the nudges to become more conscious. Not everyone is on this accelerated path of ascension.

5th Dimension: This is the place, the space,  the energy of which I often refer to as the New Earth based on oneness and unity conconsciousness. It is an energy where time collapses and we live life in present time. Polarity, conditions, judgements, 3D paradigms-patterns-constructs no longer exist. We co-create fully with ourselves and Universe and with each other. Instant manifestation is a way of life. For instance you think to yourself, ” I would love to eat an orange,” and an orange instantly appears. That instant manifestation is why it is important to clear away now the negative and limiting thoughts from your being.

In a 5D world you are conscious of being aware. Fear, need of safety, lack of trust don’t exist.  Feminine and masculine energies blend together in harmony. You vibrate differently; faster and you are more fluid as a result.  The light of Source and your being shines through you and all around you. There is a unity consciousness which is a state and being of oneness.

When you are fully immersed in the  5th Dimension you look upon those still in 3D with compassion. There is no judgement for you know they have made their choice and that they have every opportunity to ascend when they choose. 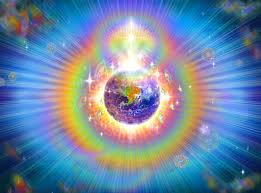 I believe for those of us living on planet earth right now along with our Divine Purpose of learning, growing, experiencing and becoming more conscious, our purpose is also to move into the 5th Dimension.

Those who emerge into 5D will still be aware of those living in the 3rd dimension but won’t be a part of their world or affected by it. I often use the example of living in a large city and those who are of 5D energy gather in one area living their life and in another area are the 3D people. Each know that the other exists and may encounter one another from time to time but because the frequencies are so very different it’s like two different worlds.

My team of universal guides keep telling me that we are fortunate to be living on the planet at this time for they have never seen any planet, race or group of beings jump two dimensions in such a short period of time. They tell me that we are awakening so quickly that many different time-lines of possibility are open to us as human beings on the planet and how we continue to expand, grow and move into consciousness will determine how all of this shifts and settles.